This past week Charles E. Smith Life Communities (CESLC) hosted Gregory Pontone, M.D., for a talk on Parkinson’s disease as part of the ‘Remember This’ series. An associate professor in the Department of Psychiatry and Behavioral Sciences at Johns Hopkins University School of Medicine in Baltimore, Maryland, Dr. Pontone is the director of the Johns Hopkins Parkinson’s Disease Neuropsychiatry Clinic and specializes in geriatric psychiatry. 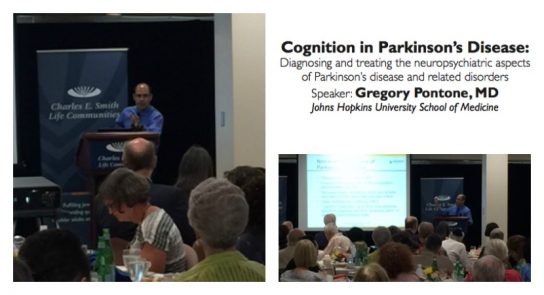 One of the main topics of Dr. Pontone’s presentation was his research into how neuropsychiatric symptoms such as cognitive impairment, anxiety, and depression influence motor impairment in those with Parkinson’s disease. Pontone also discussed issues that arise when diagnosing and treating the neuropsychiatric aspects of the disease within a clinical environment.

Parkinson’s disease is a chronic and progressive movement disorder that currently affects over one million individuals in the United States. While its causes are still being investigated and it currently has no cure, the disease can be managed with both medication and surgery. Physical therapy, including PT regimens that are offered on the CESLC campus, can also help individuals with Parkinson’s with many aspects of daily living.

Though its causes are not fully understood, the basic physiological processes involved in the disorder have been studied in detail. It is known, for instance, that Parkinson’s involves losing a substantial amount of neurons that are located in a part of the brain known as the substantia nigra. Many of these brain cells produce dopamine, which is a chemical that sends signals to parts of the brain that control movement. As these cells die off and dopamine production subsequently declines, observable symptoms such as tremors in the hands, arms, legs, jaw, and face, slowness of movement, limb stiffness, and imbalance usually occur.

Dr. Pontone’s presentation, which was held at Ring House, was sponsored by the Hurwitz Lecture Fund as part of the ‘Remember This’ series. Designed to facilitate the exchange of information that relates to memory loss and cognition in older adults, ‘Remember This’ seminars are held on the CESLC campus throughout the year. For information on upcoming ‘Remember This’ events, contact 301-816-5052 or go to www.smithlifecommunities.org.